Decision-making and the impact of context in financial services

Knowing what drives the behaviour of your website visitors and what impacts a visitor’s decision to purchase or not purchase is a fundamental component in conversion optimisation.

Understanding the factors which impact decision–making is not easy to achieve because, as many years of research have shown, people’s decisions are highly adaptive to the way information is presented to them or the type of decision they are asked to make.

Take the classic experiment in which people are asked to either accept or reject an option in a choice situation.

In one version of this experiment, participants were asked to make a judgement in a custody case.[1] The choice was between an ‘extreme’ parent with both good and bad characteristics (good: very close relationship with the child, extremely active social life, above-average income; bad: lots of work-related travel, minor health problems) and an ‘average’ parent with only average characteristics (reasonable rapport with the child, relatively stable social life, average income, working hours and health).

“…when faced with a choice, they make it up on the spot, looking for reasons why one option is better than another rather than expressing a stable preference.”

It appears that in this kind of situation, people’s decisions are not driven by pre-conceived preferences (e.g., “Children need stability”). Surely, people cannot think that the same option is both the best and the worst choice simultaneously. 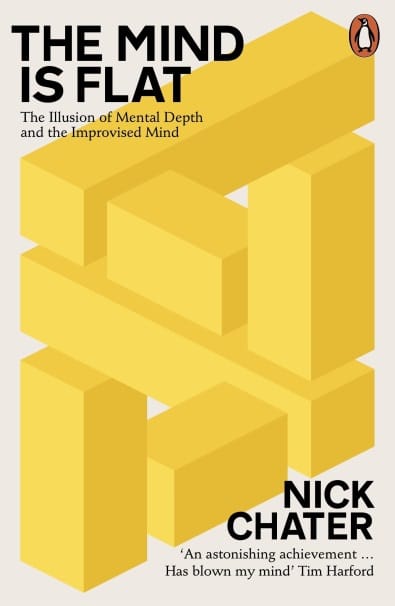 Instead, it appears that, when faced with a choice, they make it up on the spot, looking for reasons why one option is better than another rather than expressing a stable preference.

This and many other examples are used by Nick Chater[2] in his recent book “The Mind is Flat” to support his thesis that our behaviour is driven by in-the-moment decisions that are instantly conjured up by an improvising mind.

Even though we all like to think that our beliefs, preferences and desires arise from the murky depths of our minds, Chater describes numerous experiments showing that what we think are our most defining characteristics, such as our political beliefs, personal preferences and even romantic attractions, are changeable and inconsistent, suggesting that they are made up on-the-spot.

Some research regarding decision-making in financial services that I have personally been involved with seems to hint at a similar conclusion.

In particular, the work of Sam Sivarajan which I supervised at the Alliance Manchester Business School[3] looked at whether ‘risk tolerance’, as measured by a risk tolerance questionnaire, was a good predictor for the level of risk investors were prepared to take.

It turned out that actual investment behaviour was not predicted by an investor’s expressed preference for a maximum acceptable level of risk associated with their investment portfolio.

Instead, risk taking behaviour was easily influenced by external information available at the moment of decision making, such as market return expectations, suggesting that investment behaviour is largely goal driven and decisions are based on momentarily available information.

The importance of testing

Designing websites based on asking visitors about their preferences is unlikely to guarantee higher conversion rates.

This is amply demonstrated by the concept of the ‘paradox of choice’.[4] Ask visitors whether they want many or few options to choose from, and they are likely to say they prefer more choice rather than less.

In the real world though, you may find that visitors who are presented with a greater number of options are less likely to converge or may express lower satisfaction.

This is because greater choice comes with an increase in the cost of having to forego options which can be almost as good, if not as good, as the chosen option.

In a situation where people have to choose from a number of equally preferable options they are more likely to regret their choice because their experience is almost inevitably going to be somewhat below the expectations they created when making their choice. Based on anticipating such regret, they may even decline to make a choice altogether.

More options may increase the likelihood of finding something that better fits our needs, but inevitably at the cost of having to spend more time and effort and, potentially, an increased opportunity cost if there is more than one fit.

This means the only way to fully understand what impacts behaviour and decision-making is to experiment and test changes against a control.

Does the lack of stable preferences mean we are always completely in the dark about how visitors will react to a website? Not entirely.

As already illustrated by the investor study described above, being married or single, and being male or female does affect the way we react to what we see.

Take, for example, the impact of gender biased adjectives used to describe jobs in online job advertisements on the number of males and females applying.[5] Adjectives that appealed to women include ‘develop’ and ‘support’, while adjectives such as ‘can-do attitude’ and ‘manage’ put them off.

“It is crucial to understand that our decisions are always the product of a complex set of trade-offs between the various costs and benefits associated with deciding one way or another, often, in a zero-sum game.”

Behavioural science has documented numerous regularities in our responses to what we encounter in our environment which could be, and already are, routinely used to predict our behaviour. Indeed, marketers are keen to exploit our inability to resist anything that comes for “free” and ignore the hidden costs that often come with such deals.[6]

It is crucial to understand that our decisions are always the product of a complex set of trade-offs between the various costs and benefits associated with deciding one way or another, often, in a zero-sum game.

Nevertheless, behavioural science does not offer a magic wand when it comes to deciding how to design a website to maximise decisions to purchase. Because of the situated nature of our decisions, it is extremely unlikely that the behaviour observed in tightly controlled experimental circumstances can easily be replicated on a website.

Insights from behavioural science are most useful in helping to explain online behaviour once we have observed it to help us design better experiments and better understand our visitors.

CRO considerations during the COVID19 pandemic

7 CRO mistakes ecommerce businesses will be making in 2020

What is conversion rate optimisation?